How’s that for a long title? OK, so here is my costume post, on the Eve of Halloween 🙂 Procrastinate much? Haha! Tomorrow is going to be a little sad for me, in a weird guilty-crafty-mom sort of way 🙂

For the past four years, I have enjoyed {a little too much for my husband’s liking} putting together a family “theme” for our Halloween costumes. It all started in 2007, when my oldest finally had a little sibling and there was someone to “coordinate” costumes with…. That first year, he was a cute little fireman and his baby brother was a dalmation puppy. Here is a pic of our fire crew: 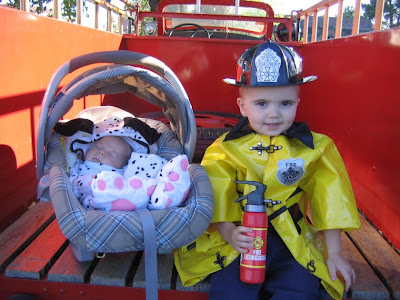 Then, at the last minute, I decided that my hubs and I had to join in the theme and I made us go as Fire and Smoke! Hahaha, I can’t believe I talked him into that one. Seriously, that was pretty much a miracle since he hadn’t ever dressed up for Halloween in the seven years we’d been married 🙂 I’m going to spare you the picture, it’s not pretty 🙂

2008… I thought, hmmmm well he agreed to be a puffy cloud of smoke last year, what can I talk him into this year?? 🙂 My oldest really wanted to be Dash from the Incredibles, so we just went with it, and decided to go as the entire family! 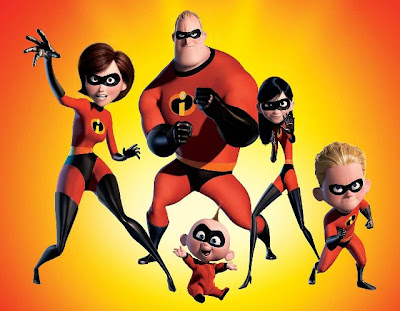 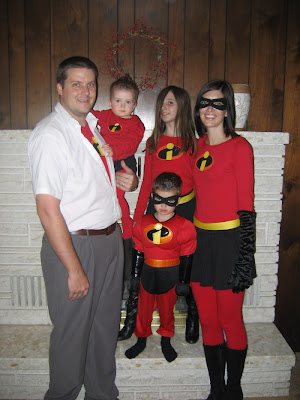 I had fun making all of our costumes (we only bought the muscly Dash suit!) And thus began our Pixar costume tradition 🙂
2009: Monsters Inc.
My husband officially withdrew himself from our family costume themes this year :)﻿ But this was probably my favorite year of costumes! I had the most adorable little Sully you’ve ever seen… 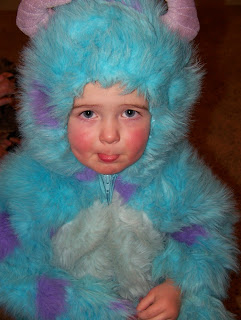 We also had a very handsome Mike Wazowski: 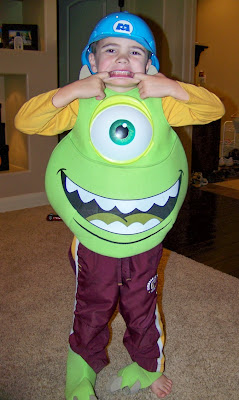 So, I decided to make my very own Celia costume 🙂 My son didn’t appreciate the fact that I was now his “girlfriend” for the night! ﻿But the 3 of us did look pretty cute together, don’t you think? 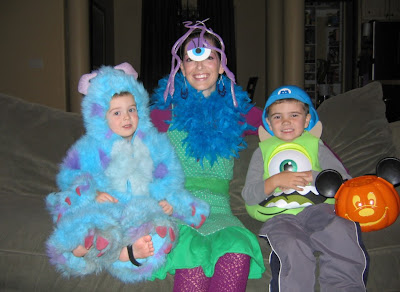 I finally had my baby girl to add into the mix! My boys were obsessed with Toy Story last year, with the release of Toy Story 3, so they were super excited to go as Buzz and Woody. I couldn’t wait to dress up my baby as Bo Peep 🙂 She wasn’t very happy in this picture… but this is the only one I got of all 3! (Oh, and just for the record, I tried to dress up as Mrs. Potato Head and it was pretty much a disaster. That is why I am not in this picture!) 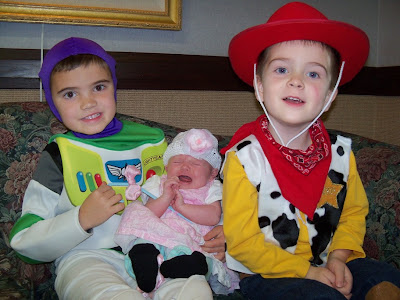 So now here we are, 2011. It is officially the end of our family theme costumes. I don’t know why I feel so bad about it…. I mean, really, I have a 1st grader now and he wants to choose his own costume and I should let him. I did let him… he chose this:

Darth Vader. You know, the high-quality one-piece polyester jumpsuit with the velcro tab in the back? Yeah, that is what my son is wearing this year. And, not to be left out, his little brother picked this one: 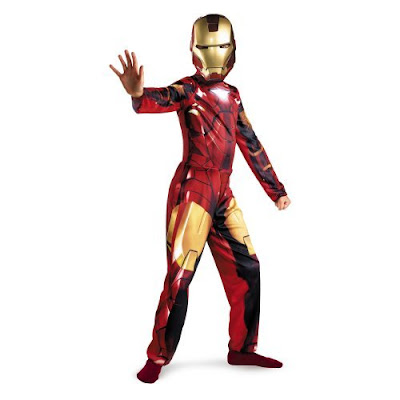 I was a little apprehensive at first… no theme, cheap costumes with plastic masks…. can I really do this?

But then, the Iron Man costume arrived in the mail and my 4-year-old hasn’t parted with it much since. He has been happily playing/eating/napping in this thing for the past several days! I can’t believe how much joy can be derived from a single polyester jumpsuit! The smile on his face is priceless.

So, I guess it is worth it. My boys couldn’t be happier with their costumes this year. I am trying to let my crafty-perfectionist tendancies-mom-guilt go, and just enjoy the holiday with a smorgasboard of costumes 🙂

I will end with the one costume I did make and planned a few months in advance… my baby girl as Alice in Wonderland. {I thought I could get my boys to go along with my theme and be the Mad Hatter and White Rabbit… no such luck!} That’s OK, she is pretty adorable all on her own: 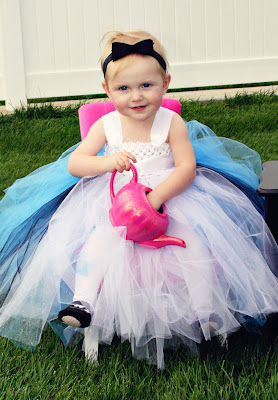 For any of you who are still looking for a last minute costume idea, check out this feature from Real Simple: 10 Last Minute Halloween Costumes
There are some fun “play-on-words” ideas that could be pulled together ﻿really fast! Here is my favorite one:

Source: realsimple.com via My Sister’s on Pinterest
{Get it? Pumpkin Pie…}  Ha! This would actually be funny to wear to Thanksgiving dinner too 🙂
But let’s not rush into Thanksgiving just yet… we still have 1 day of Halloween costumes, candy, and trick-or-treaters left to enjoy. Have a Happy and safe Halloween with your loved ones!