Today I’m sharing a quick weekend update I did in my Boys’ bedroom. It’s getting closer to being “done” and I love how it’s turning out.

After updating their reading nook last week, the next space I wanted to tackle was the bunk bed area. I had a few ideas about how to personalize the space for each kid. I had some large wooden letters {from Hobby Lobby} but they needed a little makeover before I could use them in the room 🙂

I sprayed the letters with a primer, then a few coats of Krylon Pumpkin Orange. I sanded them to give them a little distressing, and the final result was a perfect pop of orange for the room! I was originally planning to hang them on wall, but then I thought of another idea… 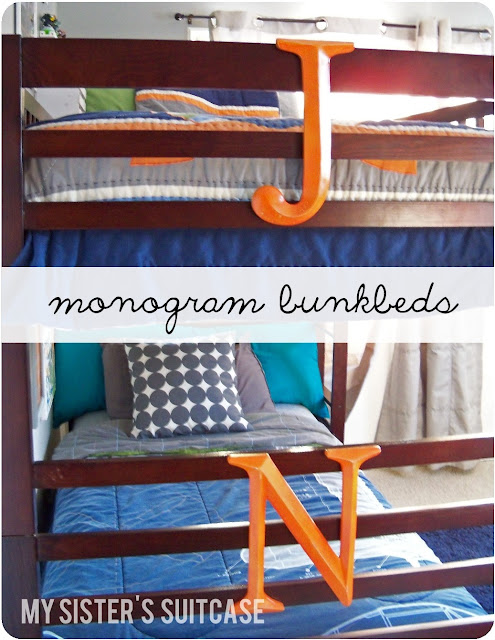 Pin It
This is the view you see as you walk into their room, and I love how it creates a custom look on their beds! I attached each letter with (what else?) 3M Command Strips! They are holding perfectly so far 🙂 It makes such a difference, and it was such a simple project. I think this is my favorite part of their room now. 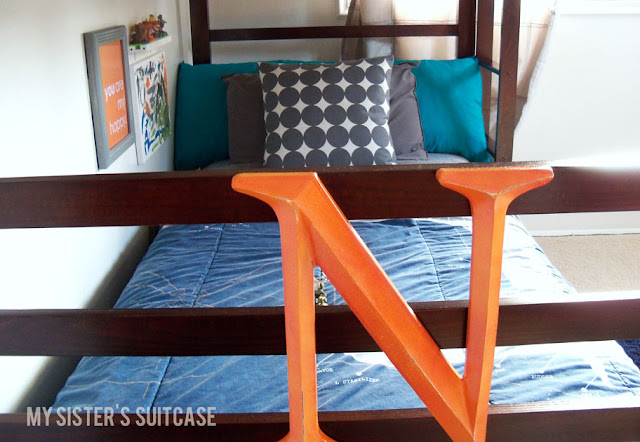 Next on my list… creating a little gallery area to display art, pictures, and personal items by each of the boys’ beds. Up first, Noah’s space: 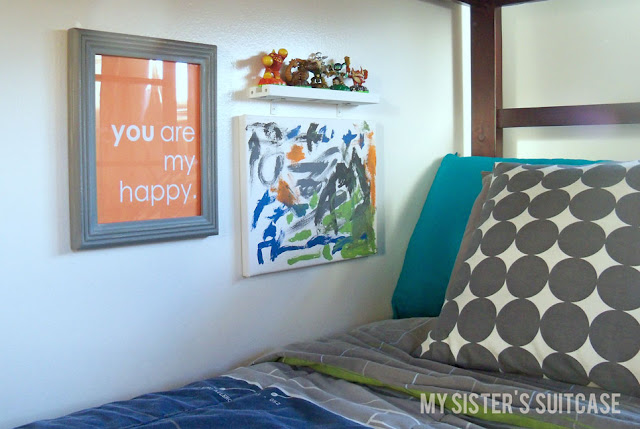 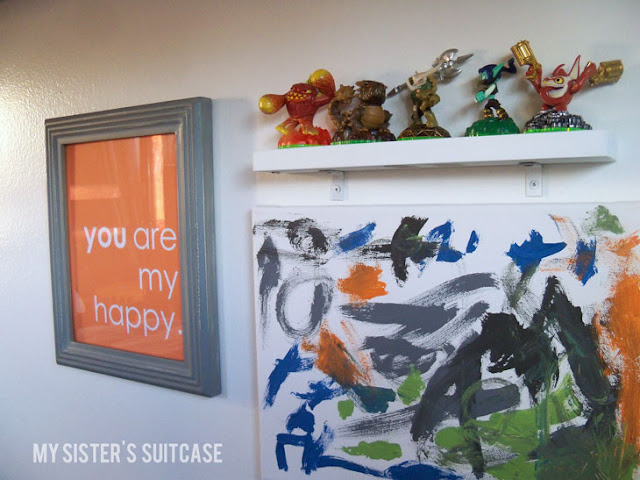 ﻿
For Noah’s space I used a canvas art project we did a while ago, and an 8×10″ print I made with some words that are simple enough for him to read and remember, “You are my happy.” This is my favorite part about his wall. His favorite thing is the DIY display shelf I created for his beloved Skylanders. If you have boys ages 4-12 at home, I’m guessing you know who these little creatures are 🙂 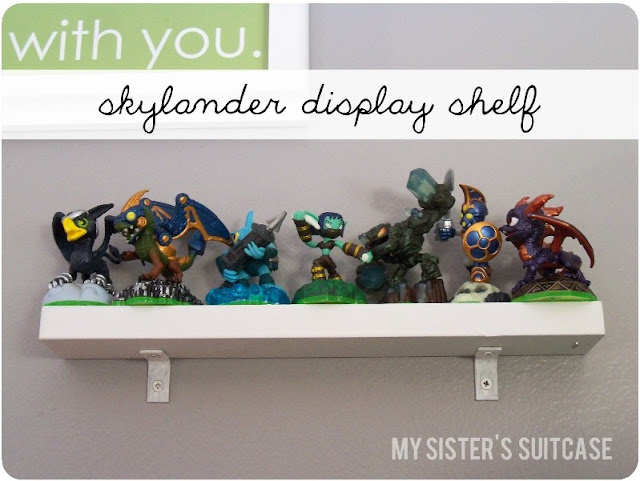 Jack has one too… and he loves it just as much as his little brother. I made these shelves out of some random finished pieces I found at Michaels on their wood crafting aisle. They were, wait for it… 29 cents on clearance!!! I grabbed 3, and used one for their dry erase board {marker holder} and 2 for shelves. I got some small corner brackets at Lowe’s, painted them white, and attached the new shelves to the wall. What do you think? 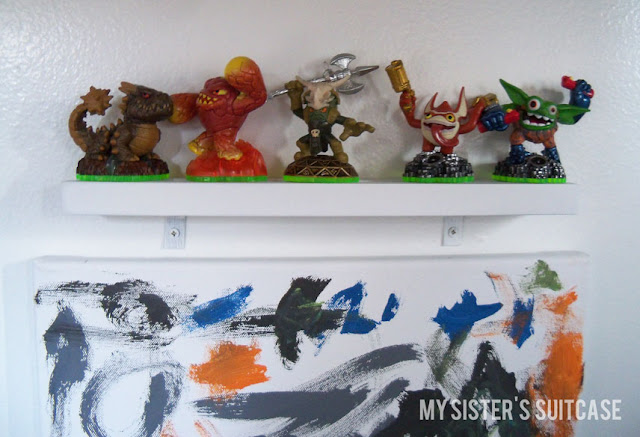 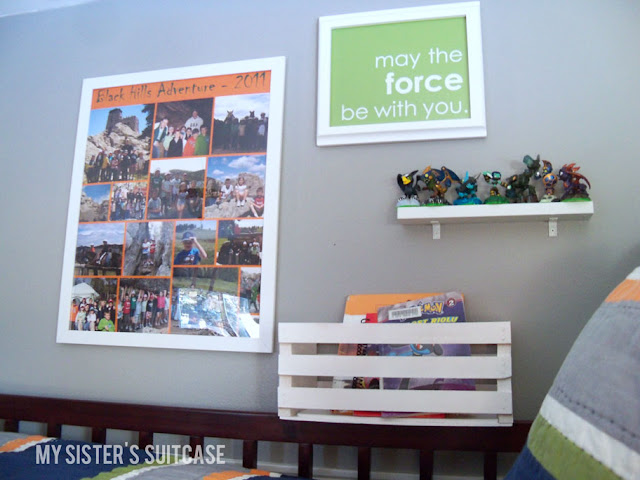 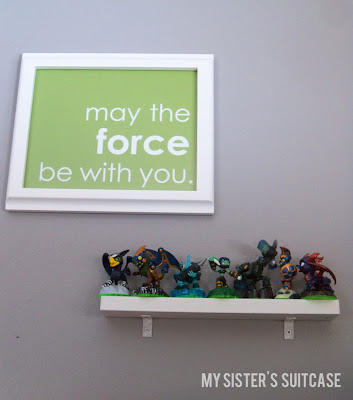 I made another print for him with {of course} a quote from Star Wars. What 6-year-old doesn’t love Star Wars??﻿ The other thing wanted him to have was a place to hold his books. After finding a library book that was “lost” for three weeks in between his matress and bedframe, I knew this would be perfect. A few months ago I found some small, unfinished wooden crates at the thrift store, I think I paid $1 for this one. I painted it white and attached it to the wall {yes! I used command strips again!} He loves having a place for all his current “reads” 🙂 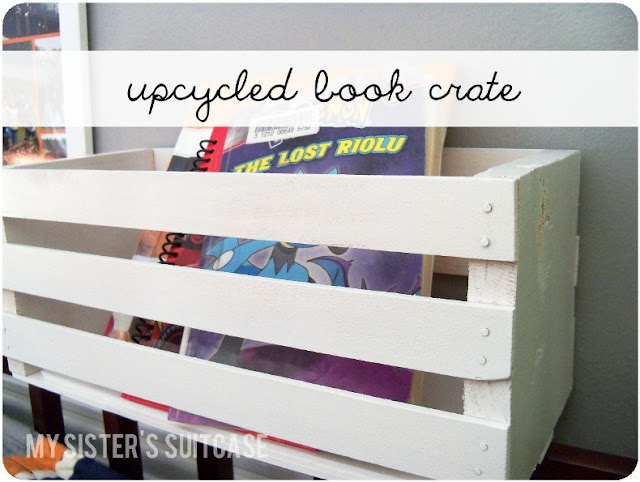 ﻿
I am so glad to have their sleeping spaces done, and they are enjoying them too! 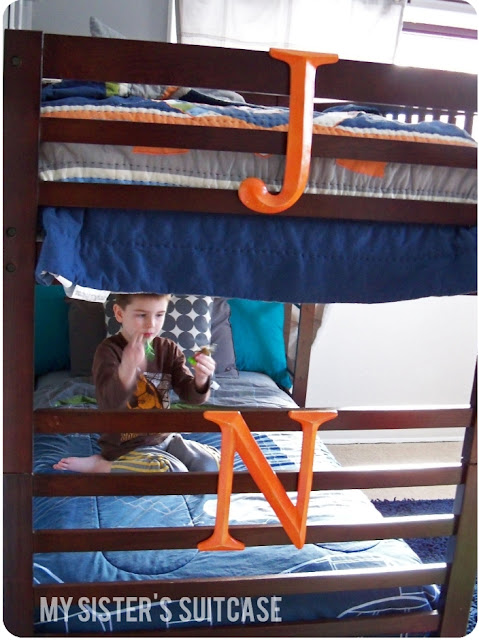 I’ll be sharing my next project in their room soon…
{If any of you would like the “May the force be with you” printable…. go here}. Happy Monday!

« Boys’ Room {Part 1}: Reading Nook Update
May the force be with you {free printable} »